Second Place: Musical Mariners in a time of 69.60 secs

Check out the photo gallery 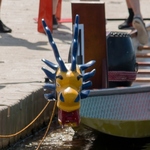 The 9th edition of the Rotary Dragon Boat Challenge on Pugneys, has been the most successful yet. Fantastic weather, a record number of entries, record crowds all combined on the day to make this a superb day out for over 5000 people!

Sponsored by Vantage Toyota, the event this year saw 40 teams racing in 39 heats of 3 boats through the day culminating in a mixed final (teams made up of more than half ladies) of 4 boats followed by a grand final of 6 boats racing across the width of the Pugneys Lake. The teams started racing at 10am in the morning and only finished with the grand final at 5pm in the afternoon. The sight of 6 full size Dragon Boats racing across the lake is one that those who saw it will not easily forget.

The whole purpose of the event was to raise money for a wide range of charities chosen by the individual teams, and while it will take some time to finalise the full figures it is expected that the total for this year for charity will be well in excess of £40,000, and this will take the total raised over the 9 years of the event to over £250,000. Around 40 charities will benefit this year from the sponsorship generated by the teams who entered the event.

All teams raised money by sponsorship but perhaps the honours this year have to go to HSBC who entered 2 teams and who’s competitors managed to raise over £13,000 for their charity, the Alzheimer’s Society. A stunning effort!!

The Lottery Big Fund kindly financed a programme entitled “Inspire Wakefield” to encourage smaller charities and organisations to enter teams in the event and encourage more people to volunteer and support them. This proved to be a stunning success with 10 new Charities entered for the first time and over 260 new volunteers supporting those smaller charities.

Organising Chairman, Bob Guard, said, “we are absolutely over the moon with the success this year of the event. All of the hard work put in over the past year by the organising committee of members of the two Rotary Clubs, the charity and social media efforts and the volunteers on the day, combined with the exceptional weather, have resulted in this great event being even better than we could have hoped.”

Guests of honour this year were, the Mayor of Wakefield, Cllr Kevin Barker and the Mayor of Kirklees, Cllr Christine Iredale and her Consort Robert, together with Robert Morphet, the Rotary District Governor of Yorkshire who presented the prizes and trophies to the winning teams. Both Mayors went away from the event wanting to enter their own teams next year! Watch this space!!!!

There were a huge variety of teams entered this year including 3 from Wakefield Trinity, one from Leeds Ladies FC, 2 from HSBC, and 2 from EuroPro in Wakefield (who kindly provided some of the prizes for the programme prize draw). Some of the other charities represented this year were - CAP, Beat Autism, the Whole Autism Family, Wakefield Pride, Wakefield Whirlwinds Wheelchair Basketball, Star Bereavement, Laura Crane, Levi Star, the Yorkshire Bleeding Disorders Group, Hannah House, Barnsley Hospital Chemotherapy ward, Yorkshire Ambulance Service, Snydale Riding for the Disabled and Hand to Mouth. A grand total of 40 charities and good causes benefitted from the sponsorship monies generated.

The day was probably summed up best by some of the spectators and participants who were overheard leaving the event after it was all over saying “what a fantastic day – we really didn’t want it to end!!”

The event in 2018 will take place on Saturday 7th July 2018 at Pugneys. Entry will be open from December of this year and all who took part this year will be invited to enter again. Full terms and conditions as well as the costs are still to be set but will be announced on this web site later this year.

THE WINNING PRIZE NUMBERS FOR THE PROGRAMME DRAW THIS YEAR WERE

2ND PRIZE – A FLIGHT OVER YORKSHIRE IN A LIGHT AIRCRAFT - 272

Check out the gallery

Watch the final and the prize presentation

We are really pleased to be able to announce that the Lottery Big Fund supported the 9th Dragon Boat Challenge this year by funding “INSPIRE WAKEFIELD!”. This is a project designed to inspire local residents in the Wakefield area to get involved with great local projects and charities to help them become more successful and to be able to help the maximum number of people. The project will provide an improved volunteer experience, help us reach a larger volunteer audience and maximise the social media activity linked to the Dragon Boat event.”